The fourth edition of the international project Fresh Design – Young Europe about design just took place in Wroclaw. The exhibition presenting the results of the workshops  will be soon opened in Wroclaw. Vernissage is taking place on 16 June at 18:30 in CRZ Krzywy Komin.

This year edition was organized by the Foundation Open Mind, together with the partner – Department of Architecture of Wroclaw University of Technology, and co-financed by the Foundation for Polish-German Cooperation and the Municipality of Wroclaw. The project partners are: CRZ Krzywy komin, GrupaKreatywni.pl, Betard and Vantage Development.

On May 13-22, students from all over Europe came to Wroclaw for the multidisciplinary design workshops with the general  theme “River: Connections” to face the challenge of reconnection of the Oder River with the rapidly developing  and modern city of Wroclaw – the capital of Lower Silesia.

A particular value for the project was an open discussion with the owner of Poland’s first house on water, Mr. Kamil Zaremba, the head of foundation onwater.pl and Coordinator for the River by the City of Wroclaw Mr.  Piotr Misiak. During the debate a whole range of issues related to the past, present and future of the Oder in Wroclaw has been raised:  from the history of development of  river infrastructure to the current technological solutions, cooperation between the city and the inhabitants in the process of developing of  Wroclaw waterfront areas. In the framework of cooperation with the Foundation Open Mind and  Foundation Stiftung Zukunft Berlin, multimedia installation LUNETA 2016 next to Wroclaw Główny  Railway Station virtual meeting of residents of both cities on water – Wroclaw and Berlin took place. In Berlin we had a chance to meet Mr.  Uwe Rada – a well-known writer and journalist from Berlin and the founder  of the famous Berlin’s initiative Flussbad Berlin, Mr. Jan Edler. In Wroclaw, special guest, Kamil Zaremba from  Foundation OnWater.pl  appeared in a company of Fresh Design participants. The meeting was conducted by the previous edition participant Martin Schinagl from Berlin.

Workshops has concluded  on May 22 at Wroclove Design Festival venue – the biggest festival  of design in Lower Silesia. Each of 5 groups presented their design concepts of development together with their tutors and supervisors. Presentations of the projects were observed by the, audience, professors and students of architecture department of Wroclaw University of technology. The event was highlighted by the lecture of Uwe Rada, who came to Wroclaw to take part in the event, his lecture “What Oder do we want” was gave inspiring historic background to the modern concepts of development of river side areas of Wroclaw, especially since half of the participants came from German.

After all, the results of the work will be presented and discussed at the universities throughout Europe and in Turkey.  Presentation and open discussions concerning the implementation of the projects results with urban activists, architects and designers and above all with residents, will be  taking place in Wroclaw in the nearest future. Details will be coming soon!

Exhibition of the above mentioned project results consisting of posters, models, videos and visualizations  and photo documentation of the workshops will be open to the public until 15 July, at CRZ Krzywy Komin in Wroclaw, ul. S. Dubois 33/35A in Wroclaw.

Fourth edition of Fresh Design – Young Europe for design, was organized by the Foundation Open Mind, together with the partner – Department of Architecture of Wroclaw University of Technology, and co-financed by the Foundation for Polish-German Cooperation and the Municipality of Wroclaw. The project partners are: CRZ Krzywy komin, GrupaKreatywni.pl, Betard and Vantage Development.

During the project, 5 projects for the modernization of riverside areas in Wrocław were established:

“From a small footbridge to a great idea” (quote: Robert Majkut) – Odractive. It is a utopian response to the problem of the lack of continuity of boulevards and paths at Oder River in the center of Wroclaw. The project goes beyond boundaries by creating multifunctional spaces. In the created platforms, which are located at the level of the water there is a place for functions that join with surrounding buildings. For university buildings, it is proposed to locate restaurants and library platform as well as a swimming pool with a beach. For the nearby Impart Art Center, an outdoor scene with a place for cinema screen and auditorium in a form of a grid-trampolines were created. As an additional function for the National Museum a display platform was proposed. All of these features are entwined by network of walking and cycling paths. Paths are once in front of the restaurant creating terraces and then raise to form a roof. As a result, the flow of people is intertwined with all the functions creating a synergistic urban organism. It goes even beyond and connects two river banks. One of the footbridges ties together university buildings forming the sky bridge on their roofs. The central point is the pole, which has a dual role in both the construction of footbridges but also is a dominant referring to the nearby towers of the Cathedral Island. 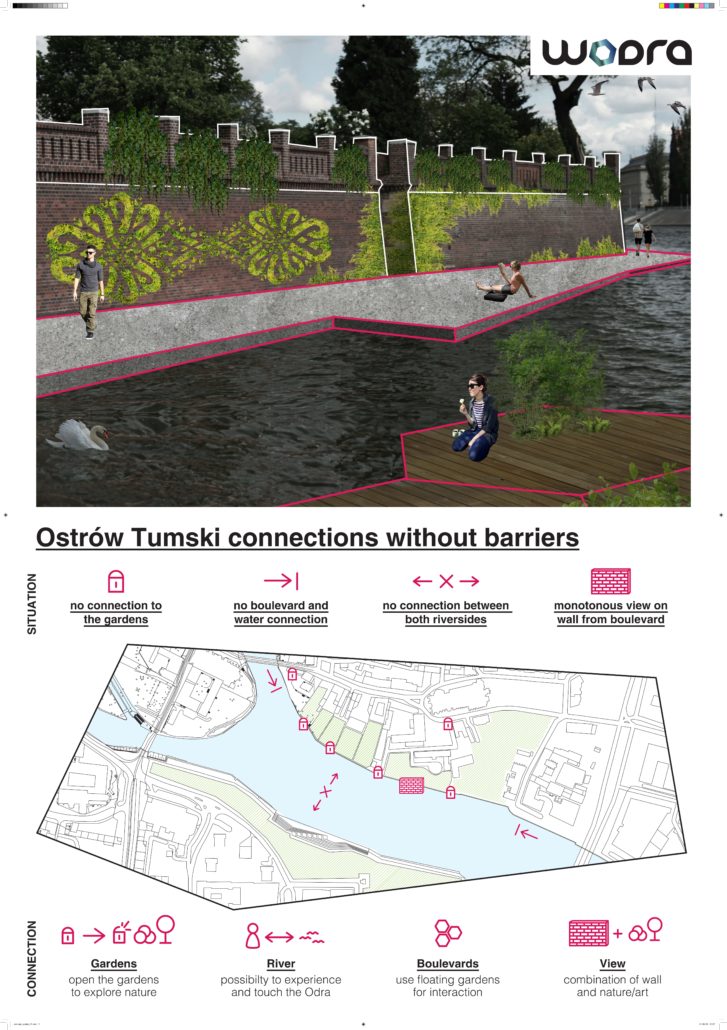 Project’s main idea is based on building connections: spatial, cultural and social. When thinking about space, one can point out the merging of currently interrupted lines of boulevards, connecting opposite river banks, opening of closed spaces and putting together the two levels: city and the river. Cultural connection means an attempt to adjoin historical tissue with contemporary artistic initiatives, and diversification of target group profile is supposed to build up social relations.

Key elements of project composition consist of riverfront boulevard and system of floating platforms. Depending on their setting and connections, one can obtain a space which meets the demands of concerts, open-air cinema, chamber concert, exhibition, rowing competition, fashion show or a retreat perfect for romantic evening. The space offers multiple possibilities for making use of it. Mobility and variability of the designed sets makes this space mysterious – it requires some exploration.

The vegetation plays important role: apart from gardens, both field and floating ones, we can see it on the wall: the composition basis for the islet. It serves as a board, where, for example with moss-painting technique, artists can present their works.

The Problem: A disconnecting wall

The wall disconnects the Odra River from its surroundings. It remains unaccessible, creating a place of solitude. The visitors of the gardens can use their senses to inhale the view, the sounds and the smells of those spaces. In contrast to this, one can find an open, inviting boulevard offering an easy access to the water and allowing a beautiful panoramic view of the other riverside, just like in a theatre. But it can be quite a challenge to concentrate on the view due to the changing amount of visitors and sources of distraction.

The Solution: The Theatre Booths

The booths transfer the experiences from one riverside to the other by framing the view and bringing the sound of the sights into the booths. Made for one person, each booth allows the view of one sight from a small window. It lets the visitor experience a place of solitude with the senses of sight and hearing. Reducing the senses to these two gives the possibility to concentrate better. The booths represent the spaces on the other riverside, emphasize their meaning and reflect their identity. Covered with mirrors, they become invisible and blend with the space. The booths are created for the cathedral, the church, water & sky, the bridge, the White House, the Graphic House and one gate. 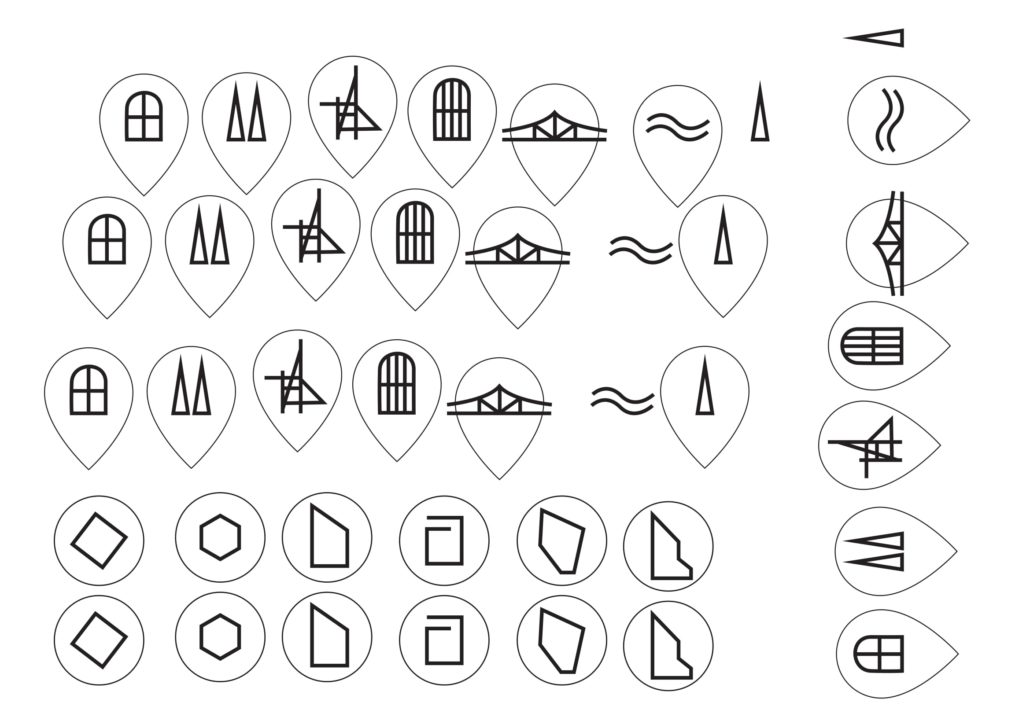 The idea of the project is creating social illusions in characteristic parts of Odra, which are fit in a grid aligned with the river and the city. In the first part, the void between existing bridges is filled with a net that people can climb on. Underneath, the path is conceived, which can be used as a shelter. The construction is incidentally filled with possibility of entertainment.

In the next area, the installation from fractured mirrors and photovoltaics is created, covering the high river banks wall. It is designed  for sitting, resting, walking close to the river. It is a place of apparent connections with opposite site. Then, river banks are connected with a kinetic bridge with areas for interaction, recreation, coffee shops, galleries and vantage points. The structure communicates rivers location visible from within the city. The illusion of consistency was achieved by multiple independently moving cubes that can float away. The part is enclosed by a glass market platform, which is a continuation of existing fair building. In this area, all walls that isolate services, schools, from the rest of the city, are obviated. Created social illusions reactivate the river and antisocial, forgotten parts of Wrocław. Their place is taken by unique and illusive connections.

“Black Ducks” identifies existing problems and to gives added value to Odra River banks along the Kurkowa Street. There is a lack of space, which would address the needs and expectations of all social groups, from children, employees of nearby offices to anglers. Both sides of the river, leading from the bridge to the chimneys of thermal power stations do not connect the banks. The most prominent feature of this area are the power station chimneys. The towers will be integrated in the landscape by vegetation. Art and light contribute to give an aesthetic accent to the bridge and power plant – it will be visible at night and combined with two paths along the river. With the concept of mirrors, waves, light, we want to improve accessibility on both sides of the Odra River: inviting a broad, safe stairs and ramps lead variously to the river bank and more delicate version on the green side, which will allow people to safely reach the water. For anglers and spending time outdoors, there will be dedicated large stations, which will help keep the green part clean and intact. On the natural side the view will never be boring: there will be a system of ramps that reflect vertically streamlined shape formed on the natural side, varied floral installations referring to the urban farm, it will all be mounted on a stone wall. In “sport” area kayakers and children will enjoy the climbing wall and a simple hardware to spend time actively. 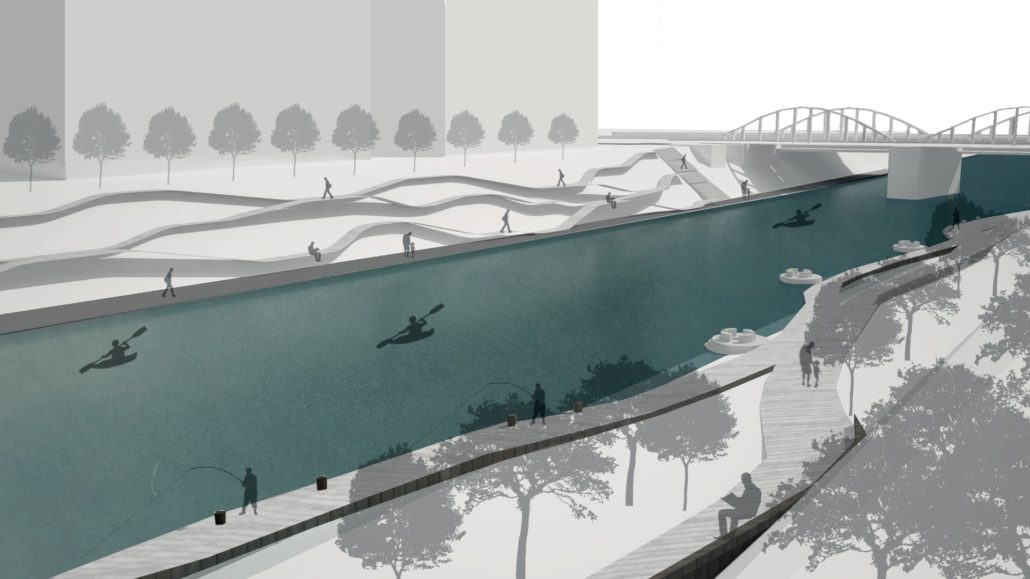 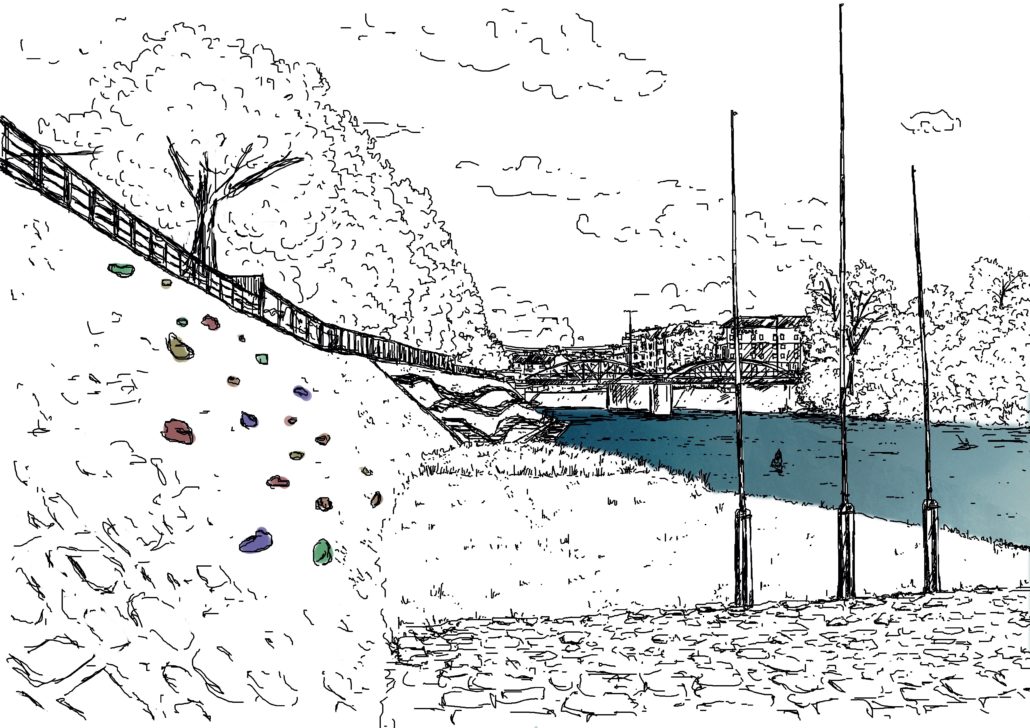